We are a little obsessed with firefighters around here. Ok, make that majorly obsessed. When the kids were asked in school last year what they wanted to be when they grew up, my daughter’s answer was “a firefighter mommy doctor.” Then she considered this for a while and said “or just a firefighter mommy” and got a very worried look and scrunched her forehead and asked with grave seriousness, “I don’t have to choose, right? I can be both?”. I’ve thus been on the lookout for a while for a female firefighter toy, and now all of a sudden several companies are offering them, so I thought I’d review those for others with aspiring firefighter mommies, as well as review general fire station playsets since I know way more than I want to about those too! So here we go. . . female firefighters, then fire stations!

Hape Happy Firemen Figures: Despite the name, this is actually a cute set of a female firefighter (who reminds me of Pippi Longstocking), an African-American firefighter, a fire hydrant and hose and a little dog. The firefighters are made of wood and non-toxic plastic, so kids can make them move by “walking” the legs or twist the bendy arms to a desired position, but they aren’t jointed like some of the other ones. The figures are about 2.5″ tall. For $15 this is a great high-quality set and I thought it was well worth it. I liked how you got two figurines plus the extras.

Fireman Sam Figurines Double Pack – Sam and Penny: Similar to the Hape set, this includes two firefighters (meant to be one male, one female) and more accessories than the Hape set (no dog, though). They are slightly taller than the Hape ones, a little bigger than 3″ each. At $9.99 it’s cheaper but the figures are plastic and quite frankly even though she’s named Penny it looks like like a male firefighter figurine, so not sure your kids would get that it was meant to be a girl (mine didn’t). So I would recommend the Hape set even though it costs more – the sturdy wooden pieces and extra details make it worth it.

Firefighter Faith: I have to give a shout out to Firefighter Faith, even though she is much smaller than the others and hence I couldn’t find her to take a picture because she’s probably rolled under a bed somewhere in our house (Update: I pulled one of these out from my secret stash of birthday gifts and tried to photograph. There’s a reason this isn’t a photography blog). Firefighter Faith is actually a toy from a wooden train set (Conductor Carl brand – they like alliteration), so she comes with a wooden firetruck that has wheels and is magnetized – you can hook it up to wooden Thomas cars or the like. She’s just this little wooden thimble-like figure – no arms that move, just a piece of wood – with her little rectangular wooden fire truck. But something about her face or size is appealing to kids. The set of Firefighter Faith and her fire truck is on sale now for $6.99 (retail is $19.99) so it’s not a huge outlay and would be a cute gift or part of a gift for someone. Keep in mind, though, that because of her size she’s not really compatible with the fire stations above, although she is compatible with wooden train tracks.

LEGO City Firefighters Mini Accessory Pack: After I initially posted this last night, someone emailed me to say that LEGO had a female firefighter figurine. I was all excited to go look it up and add it to this post. Then I read the rest of her message and all I can say is big fail, LEGO. So this is a special set of four extra firefighters, and it’s not cheap, and only one is female – it seems like even the LEGO sets that come with multiple firefighters or rescue workers have only male ones. But the real reason why this is a fail in my book is that apparently the firefighter helmets don’t fit on the female firefighter – you have to take off her hair in order to put one on! I can just see my kids playing with this – the firefighters are all napping (everyone likes to nap except for my kids themselves, it seems) and then they yell “emergency!” and go to put on the fire helmets and gear and put them in the firetruck. . . only they have to take the hair off of the girl first. Just great.

And if you’re ever in Manhattan, check out the FDNY Fire Zone store on 51st street – a friend brought us these great female firefighter figurines from the store that sadly are not available in their online store. Unfortunately the Boston Fire Department doesn’t have a store, or I would absolutely be telling you all to shop there and support real firefighters! 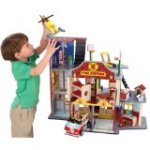 KidKraft Deluxe Fire Rescue Set: Kidkraft makes several different fire stations and fire and rescue sets, and I think they are the winners for quality and value. I’ll show the one we have in a moment, but right not I picked this one as my #1 recommendation in part because it’s not only a great toy but also on sale for 50% off on Amazon right now. This is a good sized set (over two feet tall and about three feet wide), made of wood, and it has lots of different rooms/areas for pretend scenarios (note: KidKraft uses the same themes among their sets, so the one I have has the same bell, helicopter, nap room with bunk beds, etc. and I can vouch for how much every kid who comes over loves this thing). Another feature to note is a moving elevator. I like this because it comes with tons of furniture, three firefighters, a helicopter, a fire truck, and an ambulance. We’ve had the other version of this for three years now and it has been played with heavily and had stuff thrown around and it still looks great.

Here’s our KidKraft set – it is the KidKraft Deluxe Hometown Heroes Rescue Wooden Playset. It ends up being about $140 including shipping everywhere I look, so almost twice the sale price of the Deluxe one. I’m pretty sure I got it on sale but even if not it would’ve been worth it – my kids love this thing (although if I was buying today I’d buy the less expensive KidKraft one). It is a more vertical version of the Deluxe Fire and Rescue Set (over 3′ tall and a little more than 2′ wide). Please note that I just took this pic in my daughter’s room so it is not a beautiful photo with all of the original accessories (yes, a LEGO giraffe does live in the firehouse. Don’t ask me why).

Hape Playscapes Fire Station: Hape, a Germany brand, makes wooden toys of amazing quality, but this one is a little too plain for my taste. It’d be best if you wanted something to put on an open table so that kids could play with from all angles, but the Kid Kraft Fire Station Set is also pretty open (though not as much as Hape) and comes with two vehicles, two firefighters, etc. at a lower price point, so I’d go with that. Still, this is very high quality and if you want a simpler option that will last forever this might be it. Oddly, Hape seems to package this fire station in two configurations – the Playscapes Fire Station and the Five Alarm Firehouse Play Set. As far as I can tell, it’s the same fire station but the play set comes with an extra firefighter and more pieces of furniture. Given that the retail price on the Fire Station set is $99 and it’s $149 on the Play Set, I would think that for a $50 difference you could buy a really nice firefighter figurine and some furniture!  (Note: as of this writing, they are both on sale on Amazon, the Fire Station set for $77 and the Play Set for $99, so maybe that makes the Play Set worth it? Still, I don’t quite get the different price points.)

Fisher-Price Imaginext Rescue City Center: If you’re looking for something inexpensive or something with electronics, this would be my pick. It’s on sale now for $29.99 (retail is $49.99) so it’s not such a big outlay, and it seems to have a ton of different options for how kids can play with it – the set is really more of a town than just a fire station, so you can turn a wheel and make flames sprout in hotel part, for example. It also comes with a firetruck and two figurines plus some accessories so it’s a way to get a lot in one package. The big downside is that it’s plastic, but at this price point pretty much all the fire stations are. The gimmick on this one is that it has Fisher-Price’s ActionTech technology, so the different components can communicate with each other, both within this set (ex: if you drive the fire truck near the fire station it recognizes it and calls out a message) and with other Fisher-Price toys.

All of the fire stations above come with firefighters that are about 3″ tall,  so could also be used with any of the female firefighter figurines I’ll talk about next! There are obviously other brands and types of fire stations, but these were the main three that I thought folks would like to consider. For example, there’s a Fireman Sam fire station but at $49.99 you might as well spend the extra $25-$30 and get one of the really nice ones above.

My more safety-conscious child created a pipe cleaner seatbelt for the helicopter and admonished the firefighters to buckle up!