UPDATE: The sale I originally wrote the blog post for is over, but Tea is still having their End-of-Season sale so I wanted to update my post since my recs mostly still hold and to say that they’ve just released the new Citizen Blue transition line.  But mostly I wanted to report back on the one item from Tea’s fall/winter collection that I’ve been stalking all season, since if you’ve been following me you know I’m kind of obsessed with hoodie sweaters.

So I’ve wanted the boy’s Gaucho Geo hooded sweater since Tea offered it in the first release of the Argentina/Bolivia collection, but obviously I was not going to pay the $69.00 retail price for it. Finally it dropped to $37.95 with the EOS sale now, so I ordered it, so ~$31 with the extra discount, so I ordered it and eagerly anticipated its arrival. I like it, and I’m glad I have it, but it is less amazing than I thought it would be. Below is the Gaucho Geo on the right, compared to Tea’s Brasov hooded sweater from the 2010 Old World Hungary collection on the left (The Brasov was my white whale – I love it and it was worth all the time it took me to track it down). I was hoping the Gaucho Geo would be like the Brasov, and it is the same nice thickness but the weave isn’t quite as tight and it isn’t as detailed. The plus is that the Gaucho Geo has a kangaroo pocket, which is pretty neat. Am I happy with it at $31? Yes, very, and I’ll buy another size if it goes that low. But would I buy it at the current $37.95 price point?  Probably not. So this gets added to my list of things to wait on vs. buy now, below. 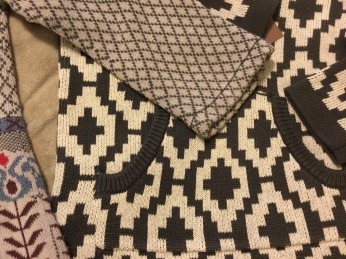 [FWIW, the Gaucho Geo (above right, current season), is a boys sweater and the Brasov (above left, many seasons ago) is a girls sweater, but I bought them both for my daughter – I like a lot of Tea’s boys hoodies and shirts on girls, too.]

Tea Collection is having a one-day sale of 20% off of all of their merchandise using code GIFT. This is great because they launched their end-of-season (EOS) sale last week so the 20% off works even on the sale EOS prices. My thoughts on buying and holding off below. . .

It’s hard to know what is happening this year, since this is the first fall/winter collection since Tea moved to the model of more releases per collection with fewer pieces and lower inventory per release. Last year Tea had a good after-Christmas sale, but that was with the Germany destination, which was with the old model. So who knows how well they’ve planned inventory from the Argentina/Bolivia destination (this year’s fall/winter collection)? There has been one other collection (India, spring/summer) on the new model of more frequent, fewer items, and its EOS sale was definitely less great than prior destinations have been.

Anyway, here’s what I’d buy now vs. wait on:

Happy hoodies (the ones on sale already). These are technically boys but look good on girls too and can be layered – I love these things. Many are close to selling out and have one random size left, so I’d be surprised if several didn’t sell out today. Retail is $29.50 and after the 20% off the majority are on sale for $11.16-$14.36, so more than half-off already.

“Baby” Girl Dresses (up to 4T). One of the changes with the move to the new model is that Tea extended baby sizes up to 4T, so you have slightly different versions of the same dress appearing in Baby Girls vs. Girls, and dresses that are just for baby girls that you can now buy for your preschooler in 4T. These have sold really well this season (is it because they’re slightly cheaper than the Girls versions or just cuter?) so if there is a baby dress you’re interested in I’d go check it out now. For a lot of the dresses there are only a few sizes left, in which case I’d buy now.

Most dresses. The 20% off puts a lot of dresses under the Black Friday $15 price point, and even those that aren’t but are still on sale have been moving pretty quickly. Exception being the sweater dresses, which I’d wait on (below)

Any non-Tea Collection product. Tea sells various brands of shoes (Natives, Old Soles, etc.), Patagonia jackets, and more. All of these are exempt from the GIFT 20% discount as non-Tea merchandise, so don’t get so excited about the sale that you forget about that. They haven’t marked down the Patagonia at all, and in seasons past we’ve seen it get marked down at the end. Again, this is a whole new ballgame so who knows, but unless you want it now I’d wait.

Most skirts. With the exception of the Ready to Ruffle and Marina Twirl skirts, which have been marked down a fair bit already and are only left in a few sizes, most of the other skirts seem to have a good bit of inventory left, so unless your heart is tied to a particular one I might wait and see if there’s another discount.

Sweater dresses.  Even the ones that have been marked down are just kind of sitting there. In the past Tea has refused to mark down sweater dresses below a certain point but then they just appear for that price on Zulily or wherever in a few months. So if you want one for the holidays, go ahead, but if you want one for later in the winter or for next year and it isn’t a must-have, I think these could get marked down further.  (The exception to this recommendation might be the Constanza Sweater Dress, which is sold out in sizes 8-12. But I don’t get short-sleeve sweater dresses in general and especially not when they are associated with Seinfeld in my head, so I’m probably biased on this one).

Most items from the last release. Again, we don’t know how things will go, but if you’re interested in just getting some nice dresses or pants, why not go with the marked-down stuff first?

This post contains affiliate links, but all opinions expressed are the author’s own (as you can tell I’m a little bit fanatical about Tea!)