Many stores are having New Year’s sales but we have tons of clothing right now so I thought I’d highlight some deals and coupon codes for kid’s accessories. Specifically, Timex has a good one (Timex rarely has coupons), and then there are plenty of socks and accessories coupons and deals. LittleMissMatched (the three-socks-in-a-pair people) has a bunch of codes right now, so I’ve put all of those, as well as a few from other places. 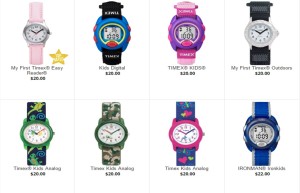 Timex  has a coupon code NYR16 for 20.16% off, with free standard shipping, through January 8th. I like Timex because they have a lot of attractive styles for boys and girls, the brand lasts, and the most expensive kids watch I see on the site is $22 (so would be ~$17.88 with the New Year’s code). I bought the pink-and-green version of the watch below (for some reason I can’t copy over that image, but you get the idea) – it’s their new analog quartz watch, which was $15.97 and free shipping after applying the promo code. Hasn’t arrived yet but I think it will be perfect my daughter.

Am I totally old-fashioned for wanting my kid to learn to tell time on an analog watch? Probably – who knows if they’ll even still have analog clocks by the time my kids grow up, but I feel like it’s important. I know it’s a little silly when it’s basically $1 more to have the Timex Ironman IronKids watch, which is water resistant, has a night light, stopwatch, alarm, and probably makes you a sandwich to boot, but I like the idea of my kids being able to tell time (watch – soon I’ll be making them learn cursive, haha)

In looking for watches, I learned that there’s a Timex Sale Site

(technically the Timex Factory Watch Outlet). Everything here is under $25, and they have free shipping at $50. It seemed like this had some great deals on adult watches but very few kids watches – I only found one. Still, I’m mentioning it because I have no idea how much their inventory changes, so it’s probably good to know about – maybe they have more kids watches at other times.

LittleMissMatched has girls clothes, swimwear, etc., but is still mostly about the accessories. They have a bunch of different promotions going on right now, so it depends what you are looking for. I think the best promotion is the buy 2, get 3 for socks which basically makes them 60% off, but some of the end-of-season sale stuff is really good too, like $2 for three nice hairclips. I believe these last through the month, but I’m not positive.

Lots of cute socks, like these fuzzy owl socks or knee high socks with pom-pops, plus a few things like barrettes that I liked in the accessories section (although for a lot of stuff there like slipper socks I’d go elsewhere – Hanna Andersson Swedish Slipper Mocasins all the way, especially when a bunch are on sale for $12 now!)

Buy one, get one free: Hair accessories

Buy one, get one free: Underwear

Buy one, get one free: Jewelry

You need a code (B2G3SOX) for this one. Socks are what LittleMissMatched is most known for because their thing is that they sell socks in triads, not dyads, so a “pair” of socks is three socks so kids can mix them up however they want (or do if tired moms lose one in the laundry it doesn’t matter). My daughter thinks these are hilarious. She also thinks it is especially funny to take the “extra” socks from various pairs and put them together, with logic like “because they both have purple” or “because this one is red and this one smells like strawberries and strawberries are red”, which brings me to. . .

In addition to ankle socks, fuzzy socks, knee-high socks, etc., you can also get scented socks. I guess this makes sense for some scents, but some things I  just do not understand:

Gymboree and Crazy8 are having their semi-annual clearance, which is up to 75% off online plus an extra 20% off either site with code EXTRA20, but the code ends tonight (1/2 for Crazy8 and I believe tomorrow for Gymboree). Still including in case you want to take a look there as they both have a lot of accessories as well. If I wasn’t so tired I would take photos of all of the hair accessories we’ve amassed from both places but perhaps that is the subject of another post. . .