Last month, I wrote about participating in the Hour of Code at my daughter’s school and mentioned that I had ordered a highly recommended board game to teach kids the basics of coding, called Robot Turtles. I promised I’d come back and review it, so here we are: my review of Robot Turtles (short answer: we liked it a lot, but made a few tweaks).

(disclaimer: I just ordered it from Amazon like anyone else, I didn’t get it for free in exchange for writing a review or anything like that – the Robot Turtles people have no idea that I exist).

What is Robot Turtles?

Robot Turtles is a board game. It’s won all sorts of awards, but the basic pieces are cards and a thick board, and each player picks a color, just like the board games we had when we were kids. Each color has basic command cards and specialty cards that can be used for more advanced play. The objective of the game is to get your colored turtle to the colored jewel piece on the board. 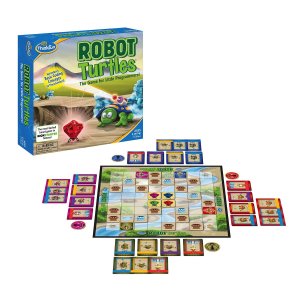 The idea is that kids learn to code by using the cards to give simple directions to move their colored turtle, at first just using turn and forward commands and then adding in obstacles or more complicated patterns for them to go around. Here’s a pic of the simplest example:

As kids learn how to play (or if they’re older when they start out), you can introduce additional cards and methods like “write program” and the “function frog” so that they are essentially doing basic programming concepts. There are obviously in between steps, too, like adding barrier cards that kids have to go around or blast through, or setting up the board with more obstacles in a more challenging way.

For a better description, here are the short (two minutes each) videos by Robot Turtles founder Dan Shapiro on how to play the game at the basic and advanced levels if you want to see it in action, or skip down to my thoughts on the game here.
Basic Play:

Robot Turtles was definitely a great purchase – even my youngest child was trying to play and got the concept that cards tell your turtle what to do. And my kindergartener loved it, as did her friends. We also had some neighbors over and all of the kids were engaged, and that was a mix of kids from all different grades (I’d say up through middle school the game is good, although best for younger kids, say 4-9). It really is designed to create a fun experience, and the kids were excited to use the special cards and to try to get their turtle to the jewel. It was also great that you could customize the experience based on where each child was at, so it is challenging but not too frustrating. I do feel like this is helping her to learn basic coding concepts, and more importantly to think that it’s “cool” to program.

The silly-looking characters were a big hit, as were the names. You can tell that this was designed by someone who understood both programming and kids. Mine loved the bug card, which you use when you’ve written a program and given instructions that are wrong. You yell “BUG!” and put the bug card down to undo it (and oh boy did they think this was hilarious when I tried to explain that people really called coding errors bugs – lots of “you’re a computer bug! No, I’m a bug!” followed by stomach-clenching laughter while adults looked at each other with resignation).

From a teaching perspective, the game is excellent. The kids really are learning about the basics of coding in a way that is fun and makes sense, and it’s great to have the board game option so they’re actually focused on what a function does, for example. I love that the game is iterative – you start out playing the simplest version, then when they get that you add in ice blocks, then when they learn to direct their turtle around those you can introduce the ice blasters, then writing a program, then functions, etc. So it’s got a lot of different levels and ways to be played, which is great because it holds the kids’ interests and pretty much is its own lesson plan.

[Important note: You (the parent) do not have to know anything about programming to play this game with your kids. If you don’t believe me, watch one of the videos above. The game lays things out for you and has clear and simple instructions – this is not a “computer programmers teach their kids HTML” game, but rather a “let’s help kids learn about basic concepts while playing something fun” game!]

Finally, as I mentioned before I like that this can be played by kids of all ages. My youngest has no idea about any of the coding stuff but if they can play CandyLand, they can learn to play this at the simpler levels, and our 11 year old neighbor thought it was fun as well. So it’s a great game if you have kids of different ages and want to play something all together.

One of the premises that Robot Turtles was founded on was that the parents are the computer, and part of the fun for kids was that they got to tell the computer what to do (e.g. boss mommy or daddy around). So it’s supposed to work that the kids play the cards and you execute them – you move their turtles on the board based on what their cards say. This totally did not work in our household. Our kids wanted to be able to move their turtles, and found it frustrating when I said mommy was going to do it. So we quickly abandoned this rule and just play where they put their cards down and think about them first, and then added a ‘rule’ where they say “Ready! Run!” and then go move their turtles themselves.

Something else that would be nice to have would have been if the game came with a few blank cards so that as kids learn more they would have the option to make up their own commands. They can do this with the function cards, which is great as it teaches them how to build commands, but there are some things that aren’t in there so for the next edition it’d be great if they had some that you could make your own. Maybe it’s just that my kids like crafty projects also, but they wanted to draw a new card for the turtle, which would instruct it to dance (I did not say that this made sense). We ended up figuringout that if you did turn right four times, your turtle went in a circle, “like dancing!”, so that was good, but I could see a much older kid wanting to have the turtle fly or something that the game just couldn’t do!