This weekend we went to a birthday party for a friend’s kid, another elementary schooler, and they had the best birthday party favors ever, which I am totally copying for my kids’ next birthdays. Instead of bags full of little plastic toys that invariably get stepped on or break in a day, or candy that we then end up having to throw out, they gave out used books. The kids loved it, the parents loved it, and I’m sure it was cheaper and better for the environment than more plastic stuff.

The parents must’ve gone to a library sale or been collecting them over the year at garage sales because at the end of the party, after they’d removed the cake, they spread out about 50 used books on the counter where the cake had been. You should’ve seen the kids’ eyes light up when they saw – they all went swarming over excitedly to check out all the options and pick which ones they wanted. There were probably twice as many books as kids, so some kids took two books, and and there were still plenty left for the stragglers.

We’ve done a book swap at a recent birthday party (you ask everyone to bring a wrapped book in lieu of a gift and put them all into a bag, and then everyone including the birthday child picks a wrapped book and gets to open it and take it home), but I thought the big pile of used paperbacks just took the cake. My kids were thrilled – they picked Alexander and the Terrible, Horrible, No Good, Very Bad Day (we must’ve been the only family left on the planet who didn’t own this yet) and one of the Magic Tree House books to add to our large collection. I will absolutely be copying this idea next year! 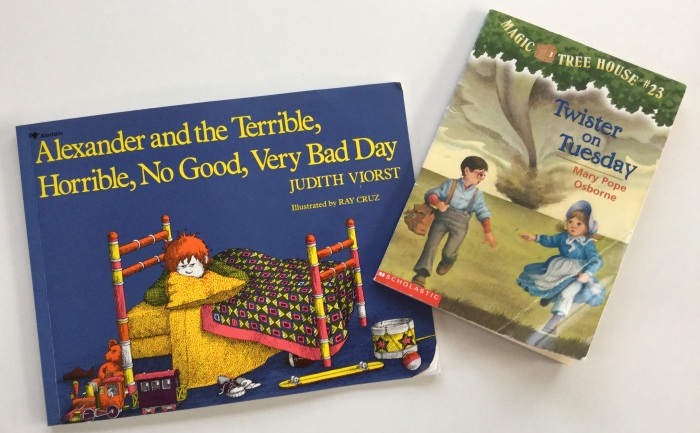