A few weeks ago I wrote about how my daughter needed to select 100 of a common object and make something to wear using the 100 pieces to celebrate the 100th day of school. In my last blog post on the subject, she had selected straws (yes, drinking straws) and decided that she wanted to make a shirt of straws, and I was feeling dubious about this endeavor.

Today, I have to publicly confess that I was wrong – her straw shirt turned out awesome, and she learned a ton while doing it, both about math and about other skills.

How she made it: 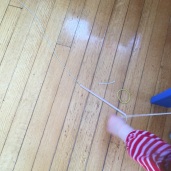 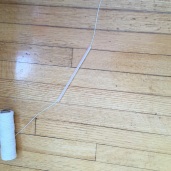 One of the points of the assignment was for the kids to learn about the different numbers that went into 100. She first counted the straws out of the box in groups of ten, to make ten groups of ten, or 100. Then she decided that the straws needed to be on string (no masking taping them on for this kid), and strung them onto a roll of twine in groups of 20. If you have a child who needs fine motor practice, I highly recommend giving them some straws and a roll of twine! She made the five strings of 20 straws over a few days, and of course once she got to about 30 straws I started to hear “will you do it for meeeee????” but I’m a believer that it’s not my homework!

It was also great practice for her to tie all the knots at the ends of the twine, and figure out how many knots she needed to tie so the straws didn’t all slide off. Then once she had her strings of straws I asked her how she was going to wear them, and she decided she wanted to make them into “loopers” (which apparently meant making four loops of five straws each out of each longer strand and tying it so it stayed together. I was secretly hoping she would just decide to go for the straw necklace concept at this point, but she wanted them to be attached to her shirt. 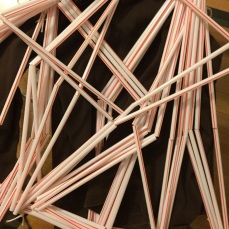 And how did she want them attached? Could we use masking tape or could she use her new knot-tying skills to tie them on with the extra twine? Oh, no. Earlier in the week I had performed surgery on one of her stuffed animals (aka sewed up a rip), so she wanted to sew them on. I sort of gulped at this, then threaded the needle, talked about how we use it carefully and how we start by putting it in so the tail is on the inside of the clothing, and handed it over. I had to hold the shirt and give her lots of encouragement (“yes, keep pulling – pull it all the way through” and “okay, now push it up near the same place you pushed it before”), but she sewed basic loops to attach each straw “looper”.

She was super proud of her straw shirt and that she’d made it “all by herself”, proclaiming that she could now sew (yes, I’ll give you the mending, kid. . .), which was a great outcome. It was definitely more work as a parent than some other 100 objects projects might’ve been, in terms of teaching her things and helping untangle the twine, holding the shirt for her to sew, etc., but it was totally worth it. Honestly, I think the hardest part was biting my tongue and not telling her how to do it – watching her try seven ways to put the straws on the twine instead of saying “hold it like this”. But isn’t that always the challenge of parenthood – finding the balance between helping them and letting them discover things themselves? 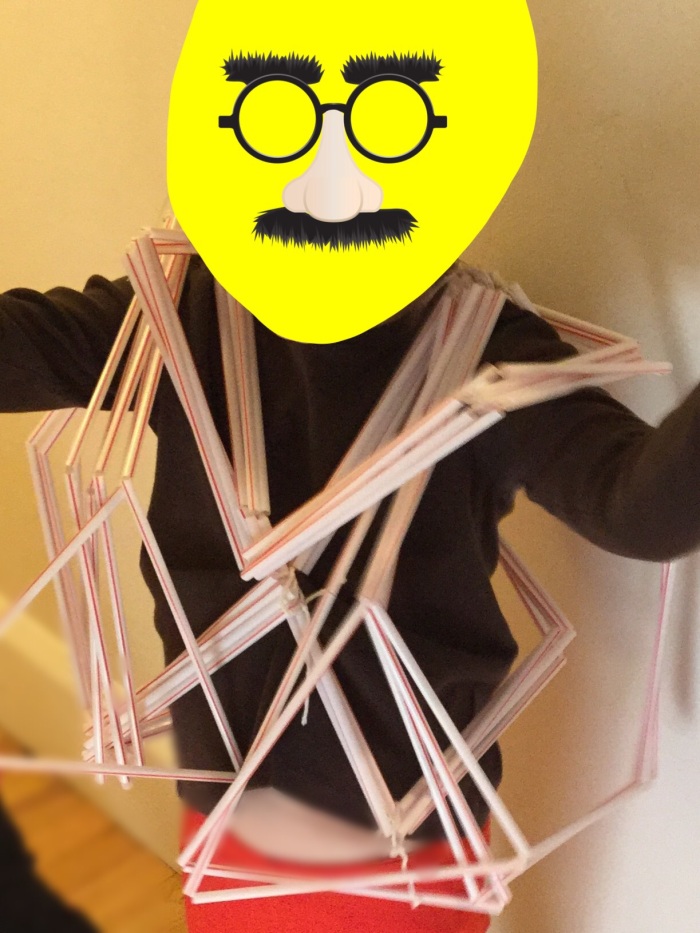